Then They Came for the Professors

It has begun in America.

“The mission of Professor Watch List is to expose and document college professors who discriminate against conservative students and advance leftist propaganda in the classroom.” 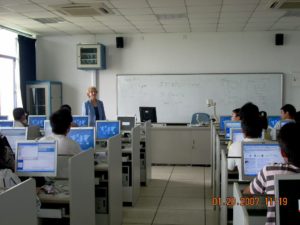 Like it or not, we have lost our precarious democracy, a travesty I wrote extensively about in my recent book, America Abandoned. This is an atrocity all its own, but what is even more terrifying is what is quickly replacing that lost democracy, something that is shaking the very foundations of our society. Call me an alarmist if you will, and I will wear the label proudly.

In these times, it will behoove us to be reminded of Pastor Martin Niemöller’s poem about the cowardice of the German intellectuals following the Nazi rise to power and the resulting human purge:

The sad truth is that the Nazi madness did not just target socialists, trade unionists, and Jews. They also targeted the mentally ill, physically disabled, homosexuals, gypsies, Jehovah’s Witnesses, artists, and, yes, even professors. This is not mere hyperbole, my friends; as Irish philosopher Edmund Burke put it, “Those who don’t know history are destined to repeat it.” If we care about America’s future, we must be aware of the faults of the past.

The Professor Watch List website is divided into two sections for searching, schools and professors; I counted 125 colleges and 150 professors during my visit. Interestingly, some college listings do not mention professors, as if certain campuses are being watched for possible future transgressions. Bearing this in mind, a few frightening questions must be answered:

The Professor Watch List inarguably wields tremendous power over individuals’ lives and careers. In fact, there is a not so veiled threat in their moniker; the very inclusion of “Watch” in their name is an obvious attempt to intimidate those on the list.

A check of the cited sources on some of the professor pages, the site’s attempt to justify the presence of said professors on the Watch List, it is clear that they are mostly radical-right websites (Campus Reform, Hyperlink, Discover the Networks, Project Veritus, the Blaze, Breitbart.com, et al). Unlike credible websites and news sources, these lack an “About Us” page or a list of staff or directors. In essence, then, the Professor Watch List is simply a radical right-wing website that only echoes others as its sources. Therefore, it is impossible to determine who is really behind the defaming and defiling information, shameless attacks on academic professionals, primarily women and people of color.

So who is behind this targeted list? The Professor Watch List is sponsored by Turning Point USA, who states the following mission:

The use of “nonpartisan” in such a mission statement is laughable at best and hypocritical at worst, considering that the website they created, sponsor, and maintain targets professors nationwide, with the clear objective of bringing harm to the reputations of anyone they perceive as discriminating “against conservative students and advance leftist propaganda.” Clearly, it is partisan, and there is no Professor Watch List on the other side. Why? Perhaps only the right thinks themselves to be victims in need of defense.

After three years of research, I feel comfortable deciphering the hidden code in that benign Turning Point USA mission statement:

What’s next on the hit list…er, Watch List? Will it be the demonization of tenure, textbooks, curriculum, administrators, and Board of Regents? How dare anyone we don’t like or simply disagree with have tenure? We cannot possibly let their job security get in our way of discrediting those we judge as ideologically impure, can we?

The purpose of tenure is to protect the free-speech rights of professors so any and all ideas may be explored by teachers and students alike, without ramifications such as those this heinous Professor Watch List website horrifically fosters. Without freedom of speech, there is no freedom of thought.

This bullying of professors is often determined by the eye of the beholder. Be careful to watch whose eye it is.